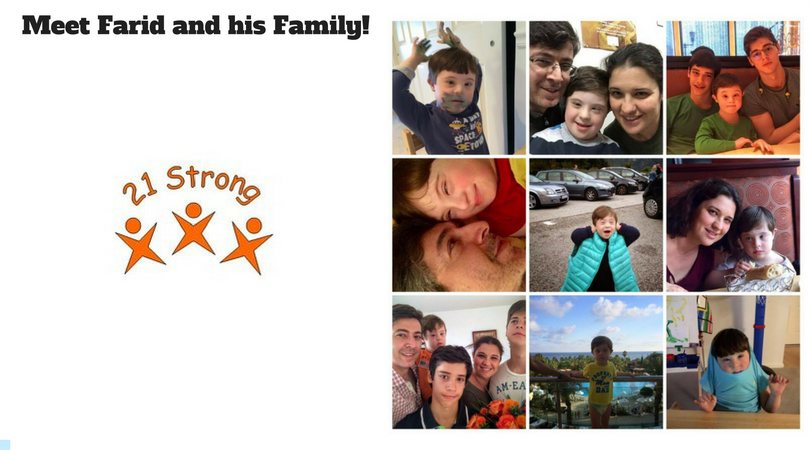 “Seven years passed since we received our precious gift. Our third son, Farid, was born in Moscow, Russia. Considering the environment where more than 50% of kids born with Down syndrome are rejected by parents, we decided to leave the country and move to the US.


The time spent in Washington, DC was amazing; we were astonished by the support provided to Farid both at school and by local community. Hence, it was with some regrets when in a year we had to move to Germany because of my husband’s job transfer.


During the next 4 years Farid was going to a Kindergarten, became more independent and adjusted to the demanding environment. However, the upcoming school years could have put an unbearable pressure both on us and, most importantly, on Farid as German education system requires separation of kids with disabilities from others and does not provide adequate education support. That is when we decided that the move back to the US would be the right one.
Within a short period of time we received a lot of supportive information from the CT Down Syndrome Congress (our deepest gratitude to Patty Alessandro), which affected our decision to settle down in New Canaan.


Then we learned about the Strong 21 community and met Melody. Not only was she very responsive to our queries, but also quite proactive by advising services that our family is benefiting today. Many thanks to Melody for her outstanding support.


In the meantime, Farid has grown fast and pretty much enjoying his life. He is in the 1st grade, loves going to school and interacting with his peers. He is a great “actor” like most of other kids are and developed a resilient character. Having embraced changes and challenges from the relocations, he nowadays understands speech in three different languages. He is getting better and stronger, which fills our lives with hope and optimism looking forward.”
​